Which Airlines Say where Accessible Toilets on Planes are?

Is Accessibility in Aviation All Doom And Gloom?

Should MAN Airport Be Fined For Failing The Disabled?

How Can Disabled People Be Forgotten on a Plane?

All About Disability Complaints Against Airlines, Airports

Prev Next
LATEST NEWS
Which Airlines Say where Accessible Toilets on Planes are? Gatwick Passenger Death Sparks New Controversy Meet the Airports Who Deliver Quality Assistance
A+ A A- 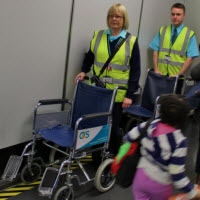 Few days into the New Year we are taking a closer look at what flying with a disability will entail in 2016.

2015 did not end on a positive note for Martin Kawage. Last December, the blind man tried to book a domestic flight operated by PNG Air to be told he would not be accepted for travel because of his impairment.

Martin did not take no for an answer and complained. Eventually, PNG Air management apologised saying the incident had been caused a “misunderstanding”.

Sadly, unsavory “misunderstandings” occur far more frequently than we’d like and can happen anywhere: from the United States to Europe, to the Far East and all the way to Papua New Guinea.

Recently published statistics show that disability related complaints are on the rise in the United States. Unfortunately, Europe does not have similar statistical tools allowing the gathering of complaints lodged by disabled flyers.

Sometime we blame poor quality of service on European disability rules. But the rise of complaints in the US, the country with the strictest disability law on the planet, tells us that a strong legal framework alone is insufficient to guarantee safe and dignified air travel to disabled people.

The clerk helping Martin Kawage buying his ticket dismissed him as nuisance after learning the man was blind. He or she did not bother checking if the man was actually entitled to flying solo. He or she simply saw Martin as a hassle, someone who needed help to get on and off the plane, maybe even while on-board.

European law makes airport assistance for disabled people cost neutral. This is perhaps the key element lawmakers in other parts of the world should consider when drafting or re-writing anti-discrimination legislation.

Like it or not, the air travel industry must come to terms with ever increasing number of people flying with disability. Hopefully, airports and airlines across the world will make access to air travel more inclusive in 2016.

Going well above mere compliance with disability laws should be airports and airlines’ target for the New Year. Some will do it out of the goodness of their hearts; others may see a commercial opportunity. After all, people with physical or sensory impairments are passengers with the same spending power of all other passengers.

No matter the mean, we are committed to help airports and airlines see people like Martin Kawage as valued customers.

Until getting in touch with Reduced Mobility Rights airports or airlines were not responding to me. I was made to feel isolated and worthless. Thanks to RMR I have been given a voice that in turn enabled me the confidence to travel again.

Our work would not be possible without the generous support of people like you. Donate now to help us make air travel easier for everyone.

Our work would not be possible without the generous support of people like you. Donate now to help us make air travel easier for everyone.